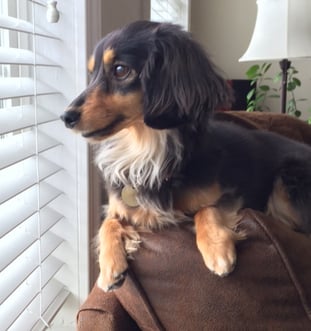 When things get tough, a visit from a furry friend always helps to lift spirits. Have you been enjoying the animal stories that are popping up everywhere? We certainly are. From stories told in a single image to new social media accounts featuring animals, furry friends are keeping us going right now. In that spirit, today we're sharing some new additions to the Tales2go library that are all about animals. Snuggle up with your pet or favorite stuffie and enjoy a little respite from reality.

Remember, this is just a quick look at some of the new animal stories available to stream right now on Tales2go. From the desktop player, check out the Subject Area: Animals for pages and pages of titles to enjoy!

Ten-Gallon Bart is just about to hang up his star and retire from his post. But then he finds out that Billy the Kid - the baddest goat around - is headed straight for Dog City! Miss Kitty and the rest of the town promise to stand behind Bart as he defends the town - but when the Kid shows up, Bart seems to be all alone. Accomplished children's author Susan Stevens Crummel is a favorite of many kids for her lively picture books.

Palaki the penguin blogs his journey as he tries to swim south, but swims in the wrong direction and ends up in New Zealand! Luckily, a group of humans at the Wellington Zoo nurse Palaki back to health and help him make his journey back home to Antarctica. Readers will have fun reading this exciting story told through blog posts. Children will be exposed to blogging while learning the importance of nurturing wildlife.

The Littlest Voyageur by Margi Preus

It is 1792 and unbeknownst to a group of voyageurs traveling from Montreal to Grand Portage, an intrepid squirrel, Jean Pierre Petit Le Rouge, sneaks onto their canoe. Le Rouge is soon discovered because he can't contain his excitement--mon dieu he is so enthusiastic. The smells! The vistas! The comradery! The voyageurs are not particularly happy to have him, especially because Le Rouge rides, but he does not paddle. He eats, but he does not cook. He doesn't even carry anything on portages--sometimes it is he who has to be carried. He also has a terrible singing voice. What kind of voyageur is that? When they finally arrive at the trading post Le Rouge is in for a terrible shock--the voyageurs have traveled all those miles to collect beaver pelts. With the help of Monique, a smart and sweet flying squirrel, Le Rouge organizes his fur-bearing friends of the forest to ambush the men and try and convince them to quit being voyageurs.

Meet Toby-a very special dog with a very important purpose-featured in A Dog's Journey, the basis for the major motion picture! Toby is a beagle who doesn't seem to have a purpose. While all of his littermates are adopted right away, Toby is left behind because he's not as energetic as they are. But because he is so quiet, he is adopted by a girl named Mona and her mother, who works at a nursing home. As Toby comforts the residents of the home, he discovers that his purpose may be the most important of all! Toby's Story is another uplifting tale of the bond that exists between humans and their cherished animal companions.

Abelard Hassam di Chirico Flint-Abel, for short-is a rich and silly mouse. He spends most of his days just having fun. Unlike most other mice, Abel has never had to work for anything. All that changes one blustery fall day when his wife's scarf flutters away in a gust of wind. Abel races off to rescue it and is swept away in a rainstorm. When the storm is over, Abel finds himself washed up a deserted island. To survive the winter, this pampered mouse will have to work hard at building a home and gathering food. Can he figure out a way to get off the island and return home-or is he stuck living by himself for the rest of his days? With warmth and wide-eyed enthusiasm, this Newbery Honor Book will delight young readers with an insightful tale of a mouse rising to the greatest challenge of his life.

On a hot day in the African savannah, a group of elephants searches for food. While foraging they often lose sight of one another. Yet at the end of the day, in one coordinated movement, the elephants suddenly regroup. This coordinated movement—and others like it—has puzzled scientists and caused them to question how elephants communicate with each other. Since the 1990s, scientists have gathered significant data on elephant “talk.” Biologists have determined that elephants use a complex system of communication of at least ten distinct sounds, combined in many variations. Researchers are now asking: what do these sounds mean? Threatened by habitat loss and illegally hunted for their ivory tusks, elephants are on the brink of extinction. Will understanding elephant talk be the key to saving the species?

The Case of the Vanishing Honeybees by Sandra Markle

Honeybees are a crucial part of our food chain. As they gather nectar from flowers to make sweet honey, these bees also play an important role in pollination, helping some plants produce fruit. But large numbers of honeybees are disappearing every year . . . and no one knows why. Is a fungus killing them? Could a poor diet be the cause? What about changes to bees' natural habitat? In this real-life science mystery, scientists and beekeepers are working to answer these questions . . . and save the world's honeybees before it's too late.

Blog
We Can Do Anything Little Listening Corners