The Cambridge Academic Content Dictionary defines the word 'mother' as either a noun - a female parent - or a verb - to treat someone with kindness and affection and try to protect that person from danger or difficulty. We may not all have the former, but we've all experienced the latter. This year, Tales2go is celebrating mothers of all kinds, because mother figures are important characters in each of our lives’ stories. In preparation for Mothers Day (on the 13th of May) we're showcasing some stories, songs, and books about moms and motherly characters. Sometimes mamas are the stars of the story, sometimes they play a more supportive role. Either way, these stories, just like our own, wouldn’t be the same without moms. Included in our roundup are historical figures who were mothers, animal moms, grandmas, stepmoms, and all sorts of characters trying or learning to be moms. And this is just a tiny sampling of titles in our library that have motherly characters! 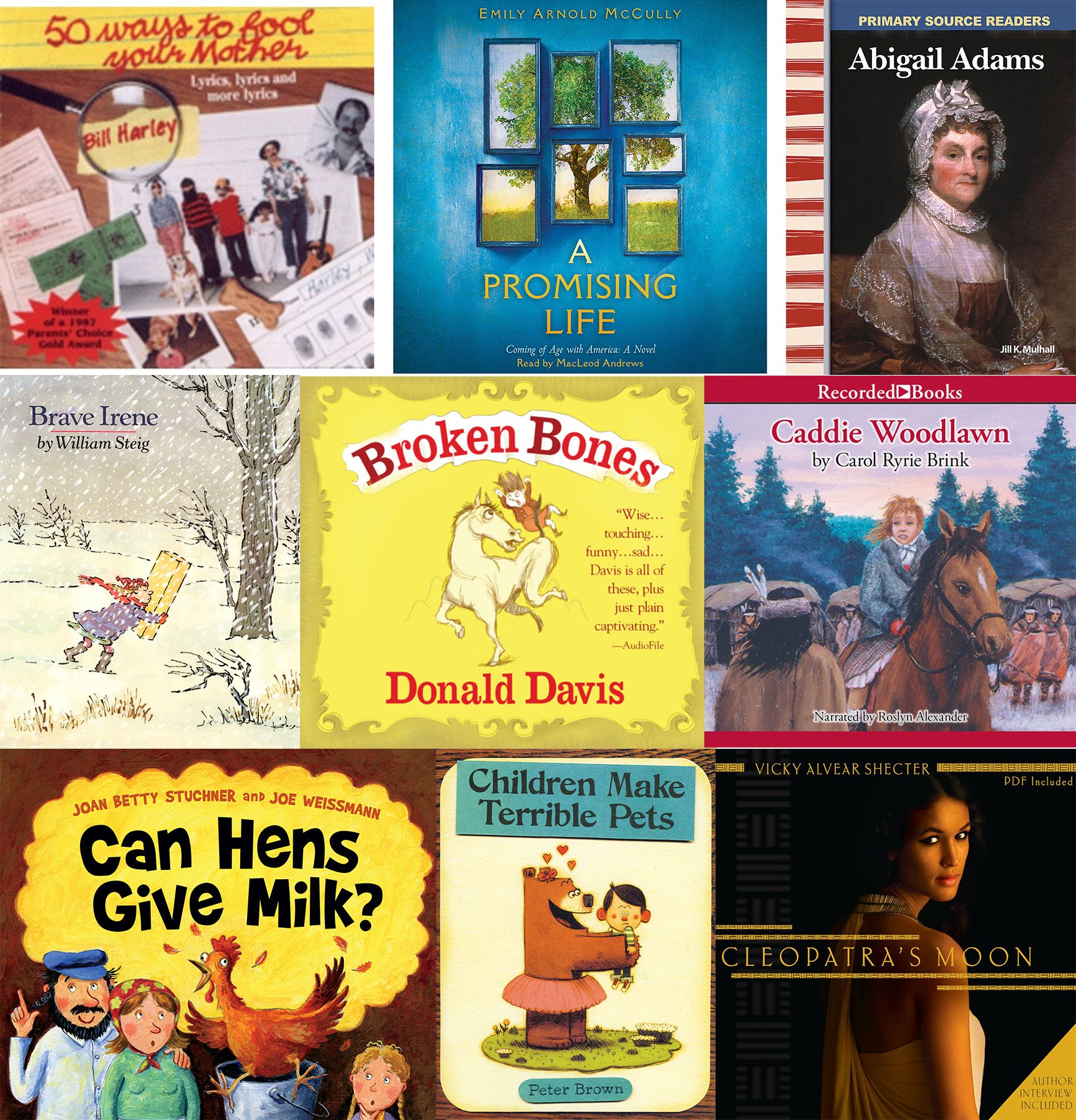 Abigail lived during times which were much more difficult for women than today. Despite this fact, Abigail Adams traveled, believed in women's rights, and experienced the American Revolution. A devoted wife, mother, and American patriot, Abigail influenced history by helping her husband, John, make important decisions.

Can Hens Give Milk? by Joan Betty Stuchner

Tova lives with her family on a small farm in the famous town of Chelm, a mythical village populated, according to Jewish folklore, by fools. Tova's farm has hens and even a rooster, but no cow. Her mother, Rivka, wishes they could afford to buy a cow, so they could have fresh milk and butter every day. One night Tova's father has a dream about how to get milk without actually owning a cow. He asks Tova to help him find a way to get milk from their hens, and the results are hilarious. Finally, to the family's joy and the hens' relief, the problem is solved by none other than the wise Rabbi of Chelm himself, and a little extra help from Tova. 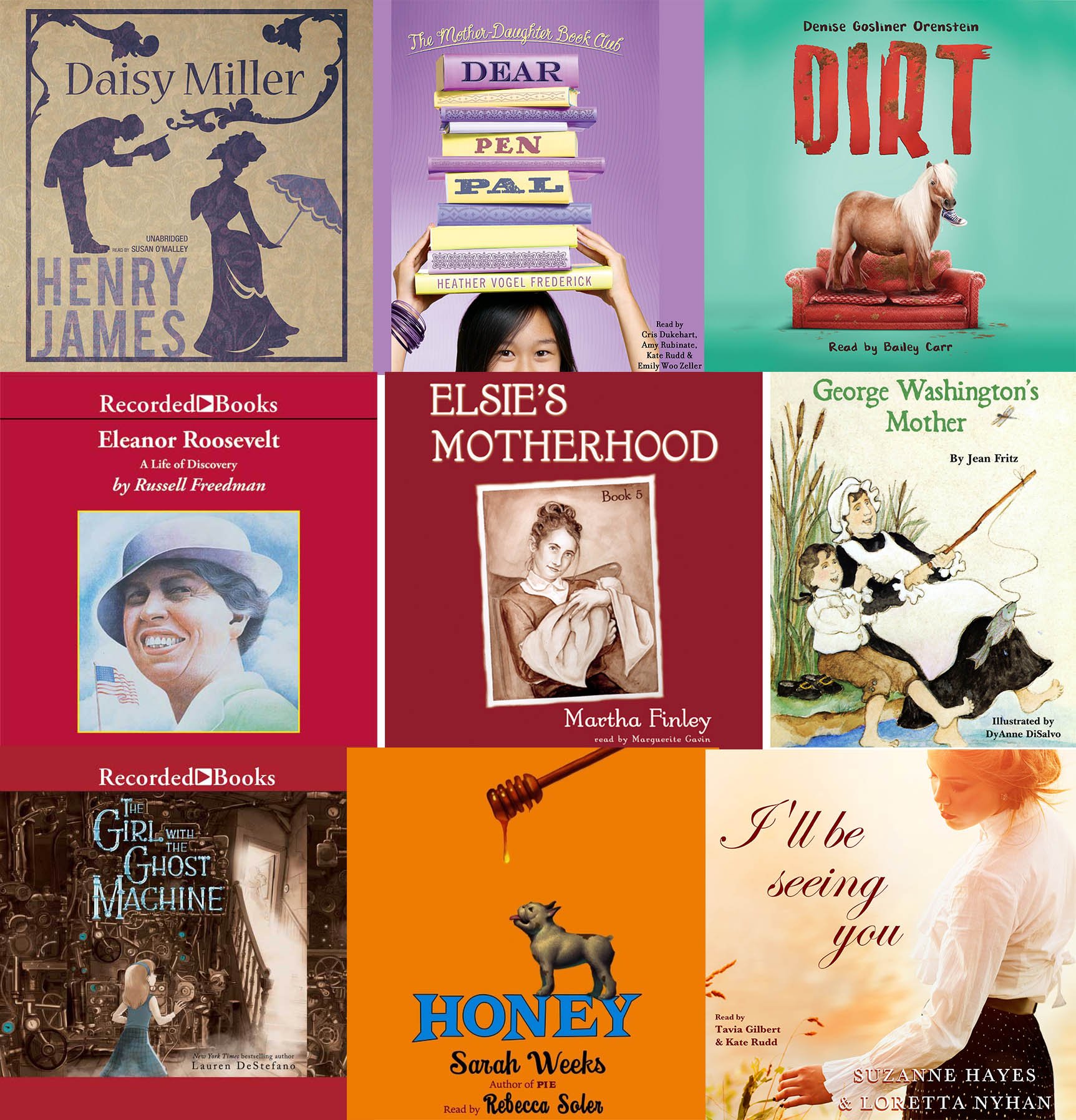 The third book in The Mother Daughter Book Club series. Could the book club break up? When Jess is offered an anonymous scholarship to a prestigious boarding school, she's not sure that leaving home--and her friends--is what she wants to do. Meanwhile Megan's grandmother comes for a long visit and turns everything in the Wong household upside down; Emma crusades against her middle school's new uniforms; and Cassidy finds out there's a big change ahead for her family. Inspired by Jess's unexpected opportunity, the book club decides to read Jean Webster's classic Daddy-Long-legs, and there's an added twist this year when they become pen pals with the girls in a book club in Wyoming. There's plenty to write to their new friends about, from a prank-filled slumber party to a not-so-secret puppy--and even a surprise first kiss. In this third book in the beloved Mother-Daughter Book Club series, the girls learn that as long as they have one another--and a good book--they're ready for whatever eighth grade has in store!

Back from the Dead Mom:

The Girl with the Ghost Machine by Lauren DeStafano

What if a machine could bring back the ones we love? From New York Times bestseller Lauren DeStefano comes a captivating middle grade tale of loss, love and hope. In this beautiful and poignant novel, acclaimed author Lauren DeStefano tells a story love and loss, and what it means to say goodbye. When Emmaline Beaumont's father started building the ghost machine, she didn't expect it to bring her mother back from the dead. But by locking himself in the basement to toil away at his hopes, Monsieur Beaumont has become obsessed with the contraption and neglected the living, and Emmaline is tired of feeling forgotten. Nothing good has come from building the ghost machine, and Emmaline decides that the only way to bring her father back will be to make the ghost machine work, or destroy it forever. 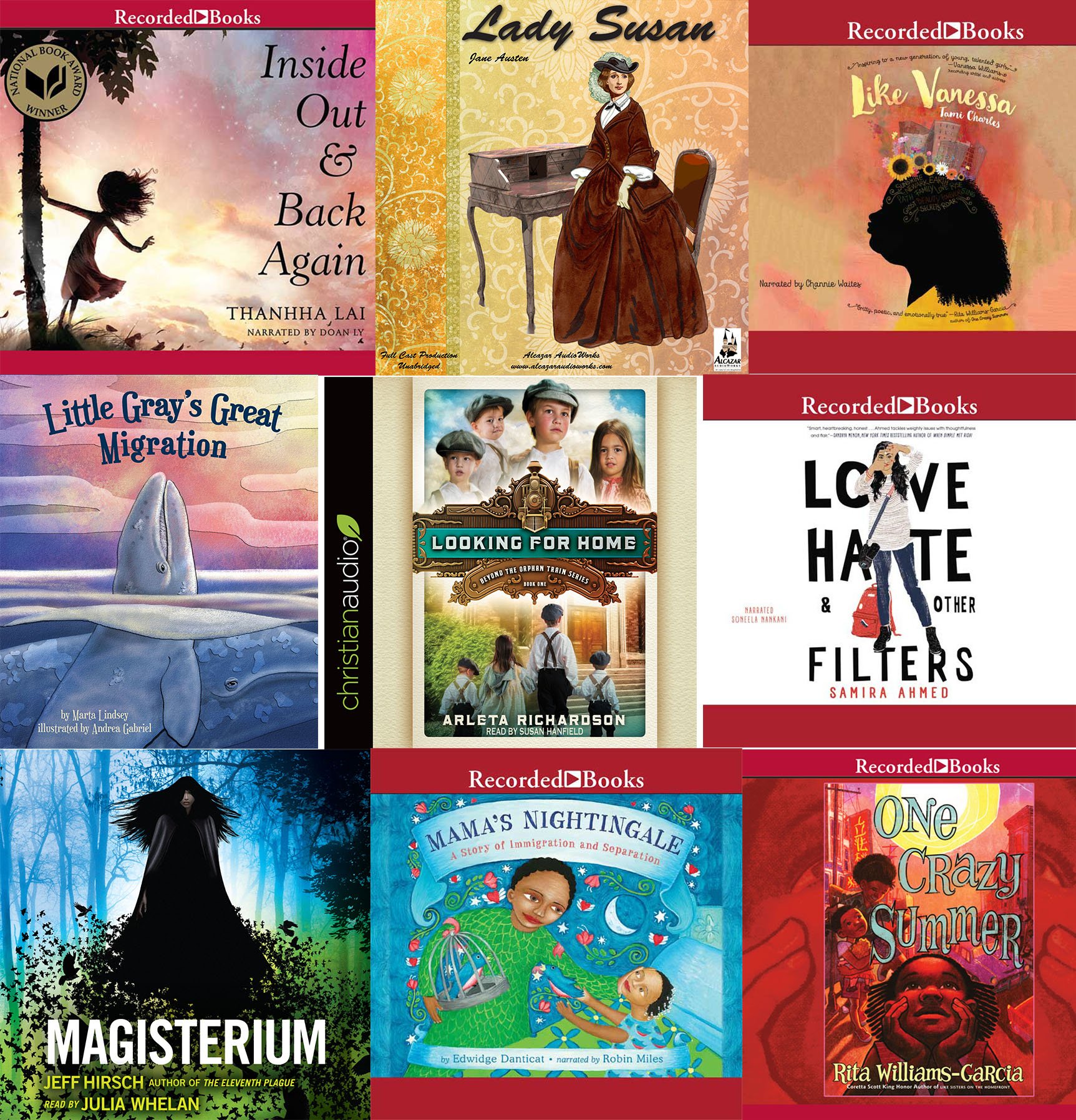 Love, Hate, and Other Filters by Samira Ahmed

In this unforgettable debut, a Muslim teen copes with Islamophobia, cultural divides among peers and parents, and a reality she can neither explain nor escape. American-born seventeen-year-old Maya Aziz is torn between worlds. There's the proper one her parents expect for their good Indian daughter: attending a college close to their suburban Chicago home, and being paired off with an older Muslim boy who's "suitable" to her mother. And then there is the world of her dreams: going to film school and living in New York City-and maybe, just maybe, pursuing a boy she's known from afar her entire life who's suddenly falling into her orbit at school. But unbeknownst to Maya, there is a danger looming beyond her control. When a terrorist attack occurs in another Midwestern city, the prime suspect happens to share her last name. In an instant, Maya's community, consumed by fear and hatred, becomes unrecognizable, and her life changes forever.

Little Gray loved his lagoon and the humans who came to visit him there. One day, Mama announces that they must swim north to a far-away sea. At first he is sad to leave his home, but Little Gray soon realizes the importance of their journey.  What happens along the way and how does Little Gray help his mother? Swim along with Little Gray as he finds the way to this special, food-filled sea. 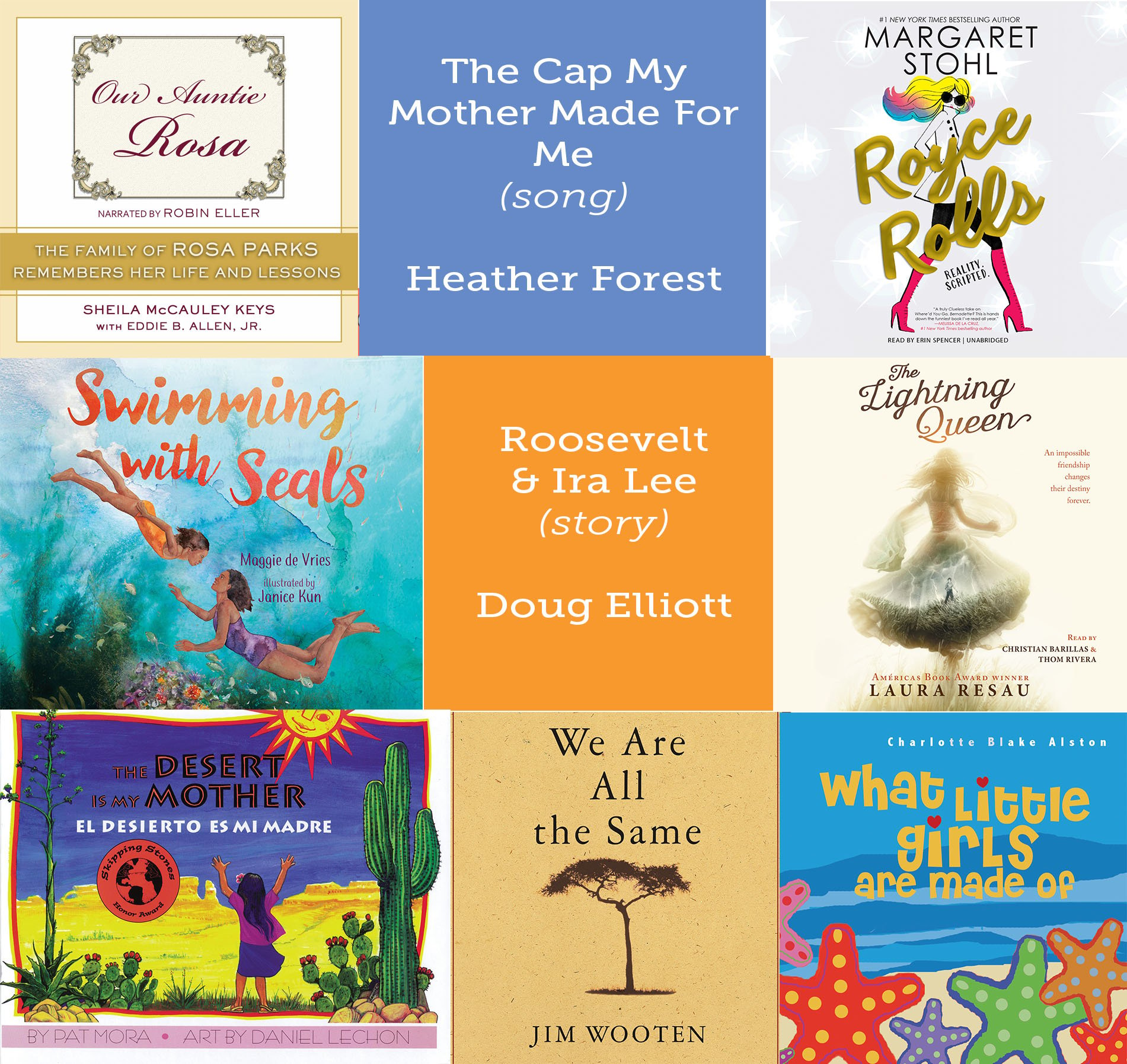 In this most intimate portrait yet of a great American hero, 'the lady who wouldn't give up her seat on the bus,' the family of Rosa Parks describes the woman who was not only the mother of the civil rights movement, but a nurturing mother figure to them as well. Her brave act on a bus in Montgomery, Alabama, on December 1, 1955, was just one moment in a life lived with great humility and decency. In Our Auntie Rosa, Mrs. Parks's loved ones share their remembrances and reflections to create a previously unpainted picture of the real woman behind the legend. Rose Parks largely disappeared from the public when she and her husband, Raymond, relocated to Detroit in 1957, escaping violently racist south.  It was in Detroit where Mrs. Parks reconnected with her only sibling, Sylvester McCauley, whom she affectionately called 'Brother,' and her thirteen nieces and nephews.  Years later, after Raymond's and Sylvester's deaths, these children would become her only family, and the closest that she would ever experience to having biological sons and daughters.  Mrs. Parks would go on to receive the 1996 Presidential Medal of Freedom and a spot on Time's list of the hundred most influential people of the twentieth century. Yet the woman her family knew as 'Auntie Rosa' was a soft-spoken person whom very few people actually knew. In this book, her family shares with readers what she shared with them about her experiences growing up in a racist South, her deep dedication to truth and justice, and the personal values she held closest to her heart.

We Are All the Same: A Story of a Boy's Courage and a Mother's Love by Jim Wooten

The extraordinary story of the little South African boy whose bravery and fierce determination to make a difference despite being born with AIDS has made him the human symbol of the world's fight against the disease, told by the veteran American journalist whose life he changed.

If you enjoyed these stories, consider writing one! Students can write from their own experiences or make up fictional pieces – encourage creativity! Remember these are just a few of the many titles about moms in our library. If you're looking for more, search "mother" in player.