Pollen counts are rising and so is the title count in the Tales2go library. We've been uploading new titles as fast as we can! No matter the ages and stages of your students, and across all subject areas and interests, we have new titles to entice even your most reticent readers. Scroll for just a few highlights at each level. Remember that you can download the full, current catalog from our website, under the Resources tab - or right here! 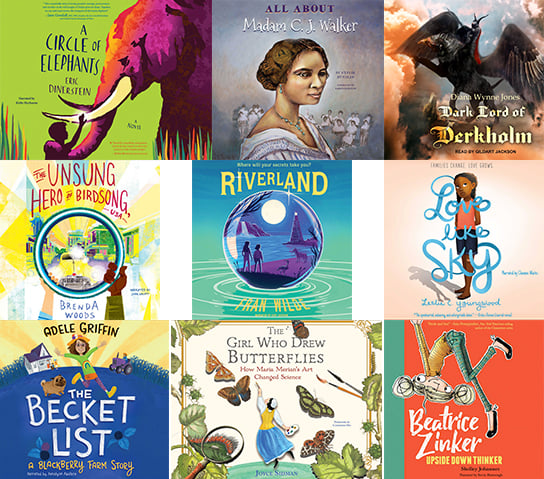 The Unsung Hero of Birdsong, USA by Brenda Woods

The Coretta Scott King Honor-winning author tells the moving story of the friendship between a young white boy and a Black WWII veteran who has recently returned to the unwelcoming Jim Crow South. On Gabriel's twelfth birthday, he gets a new bike--and is so excited that he accidentally rides it right into the path of a car. Fortunately, a black man named Meriwether pushes him out of the way just in time, and fixes his damaged bike. As a thank you, Gabriel gets him a job at his dad's auto shop. Gabriel's dad hires him with some hesitation, however, anticipating trouble with the other mechanic, who makes no secret of his racist opinions. Gabriel and Meriwether become friends, and Gabriel learns that Meriwether drove a tank in the Army's all-Black 761st Tank Battalion in WWII. Meriwether is proud of his service, but has to keep it a secret because talking about it could be dangerous. Sadly, danger finds Meriwether, anyway, when his family receives a frightening threat. The South being the way it is, there's no guarantee that the police will help--and Gabriel doesn't know what will happen if Meriwether feels forced to take the law into his own hands.

"Love ain't like that." "How is it then?" Peaches asked, turning on her stomach to face me. "It's like sky. If you keep driving and driving, gas will run out, right?" "That's why we gotta go to the gas station." "Yep. But have you ever seen the sky run out? No matter how far we go?" "No, when we look up, there it is." "Well that's the kind of love Daddy and Mama got for us, Peaches--love like sky." "It never ends?" "Never." G-baby and her younger sister, Peaches, are still getting used to their "blended-up" family. They live with Mama and Frank out in the suburbs, and they haven't seen their real daddy much since he married Millicent. G-baby misses her best friend back in Atlanta, and is crushed that her glamorous new stepsister, Tangie, wants nothing to do with her. G-baby is so preoccupied with earning Tangie's approval that she isn't there for her own little sister when she needs her most. Peaches gets sick-really sick. Suddenly, Mama and Daddy are arguing like they did before the divorce, and even the doctors at the hospital don't know how to help Peaches get better. It's up to G-baby to put things right. She knows Peaches can be strong again if she can only see that their family's love for her really is like sky.

The Girl Who Drew Butterflies by Joyce Sidman

Before Carl Linnaeus began classifying organisms, before John James Audubon drew birds from the wild, before Charles Darwin proposed his theory of evolution, there lived a thirteen-year-old girl named Maria Merian who loved to draw bugs. With a keen eye and deft hand, she rendered soft green caterpillars, papery-winged moths, and the dazzling, intricate beauty of the butterflies. But drawing these fascinating creatures wasn’t enough for Maria; she wanted to understand their small, mysterious lives. Where did they come from? What did they eat? And perhaps most miraculously of all, was there a connection between creeping caterpillars and beautiful butterflies? With no formal training or university education, Maria Merian took on the role of artist, adventurer, and scientist in seventeenth-century Europe—a time when women were rarely allowed responsibilities outside the home, and unusual interests led to accusations of witchcraft. Her intrepid fieldwork and careful observation helped uncover the truth about metamorphosis and changed the course of science forever. The Newbery Honor-winning author and poet Joyce Sidman masterfully paints a riveting portrait of Maria Merian—the girl who drew butterflies, the woman who has been called the world’s first ecologist. 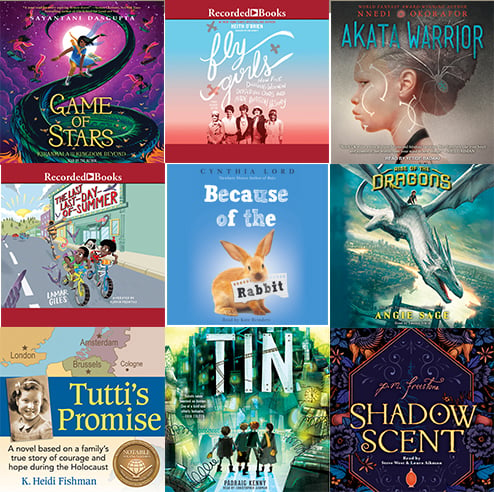 The untold story of five women who fought to compete against men in the high-stakes national air races of the 1920s and 1930s - and won! Between the world wars, no sport was more popular, or more dangerous, than airplane racing. Thousands of fans flocked to multi-day events, and cities vied with one another to host them. The pilots themselves were hailed as dashing heroes who cheerfully stared death in the face. Well, the men were hailed. Female pilots were more often ridiculed than praised for what the press portrayed as silly efforts to horn in on a manly, and deadly, pursuit. Fly Girls recounts how a cadre of women banded together to break the original glass ceiling: the entrenched prejudice that conspired to keep them out of the sky. Fly Girls celebrates a little-known slice of history in which tenacious, trail-blazing women braved all obstacles to achieve greatness.

Because of the Rabbit by Cynthia Lord

Newbery Honor-winning author Cynthia Lord has written a sensitive and accessible book about the challenges of fitting in when you know you're a little different. On the last night of summer, Emma tags along with her game warden father on a routine call. They're supposed to rescue a wild rabbit from a picket fence, but instead they find a little bunny. Emma convinces her father to bring him home for the night. The next day, Emma starts public school for the very first time after years of being homeschooled. More than anything, Emma wants to make a best friend in school. But things don't go as planned. On the first day of school, she's paired with a boy named Jack for a project. He can't stay on topic, he speaks out of turn, and he's obsessed with animals. Jack doesn't fit in, and Emma's worried he'll make her stand out. Emma and Jack bond over her rescue rabbit. But will their new friendship keep Emma from finding the new best friend she's meant to have?

In this gripping, imaginative, and hilarious adventure -- comprised of an unforgettable crew of misfits -- a boy and his mechanical friends discover the truth about his past. In an alternative England of the 1930s where the laws of mechanics govern even the most talented engineers, a mismatched group of mechanicals want nothing more than to feel human. Under the guardianship of the devious and unlicensed Gregory Absalom, an engineer who creates mechanical children, they have no choice but to help him in his unlawful practice. But through his unethical work, Absalom winds up creating a loyal and lively group of friends who will go to the ends of the Earth for one another. When the story’s protagonist, Christopher, discovers a devastating secret about himself and the friends are torn apart, it’s up to his friends to find him. What they’ll discover is the secret about the dark experiment that ended in disaster many years before ... Tin is an adventure story about friendship, courage, and loyalty, and what it means to be human.

The Ideas that Made America by Jennifer Ratner-Rosenhagen

Long before the United States was a nation, it was a set of ideas, projected onto the New World by European explorers with centuries of belief and thought in tow. From this foundation of expectation and experience, America and American thought grew in turn, enriched by the bounties of the Enlightenment, the philosophies of liberty and individuality, the tenets of religion, and the doctrines of republicanism and democracy. Crucial to this development were the thinkers who nurtured it, from Thomas Jefferson to Ralph Waldo Emerson, W. E. B. DuBois to Jane Addams, and Betty Friedan to Richard Rorty. The Ideas That Made America: A Brief History traces how Americans have addressed the issues and events of their time and place, whether the Civil War, the Great Depression, or the culture wars of today. In engaging and accessible prose, this introduction to American thought considers how notions about freedom and belonging, the market and morality-and even truth-have commanded generations of Americans and been the cause of fierce debate.

A heart-wrenching YA coming of age story about three siblings on a roadtrip in search of healing. With a strong family, the best friend a guy could ask for, and a budding romance with the girl of his dreams, life shows promise for Teodoro "T" Avila. But he takes some hard hits the summer before senior year when his nearly perfect brother, Manny, returns from a tour in Iraq with a devastating case of PTSD. In a desperate effort to save Manny from himself and pull their family back together, T's fiery sister, Xochitl, hoodwinks her brothers into a cathartic road trip. Told through T's honest voice, this is a candid exploration of mental illness, socioeconomic pressures, and the many inescapable highs and lows that come with growing up? including falling in love.

Be More Chill by Ned Vizzini

The groundbreaking novel that inspired the Broadway musical! Jeremy Heere is your average high school dork. Day after day, he stares at beautiful Christine, the girl he can never have, and dryly notes the small humiliations that come his way. Until the day he learns about the "squip." A pill-sized supercomputer that you swallow, the squip is guaranteed to bring you whatever you most desire in life. By instructing him on everything from what to wear, to how to talk and walk, the squip transforms Jeremy from geek to the coolest guy in class. Soon he is friends with his former tormentors and has the attention of the hottest girls in school. But Jeremy discovers that there is a dark side to handing over control of your life - and it can have disastrous consequences.