School's out for summer and educators are taking time to relax and get re-energized for fall. So this midsummer post is for everyone - librarians, teachers, and parents!

Now we've reached the peak of summer fun and sun, you might not be thinking much about school and studying. Unfortunately, that could to lead to a decline in your students' academic ability when fall arrives and they're trudging back to school. Luckily, audiobooks are a fun, easy, and practical way to help keep kids' brains engaged and learning - even when the temperatures feel hotter than the sun. All you need is an internet ready device and headphones or speakers. This week, we have summer listening ideas for everyone - ideas for fitting listening into your summer lifestyle and title suggestions to grab (and keep!) the attention of every member of your family.

At The Pool
Pool breaks for adult swim feel shorter when kids are listening to a good story (plus parents can actually get their laps in while someone else does the storytelling). These stories are short - 15 minutes or less - perfect to fit between the lifeguard's whistles. 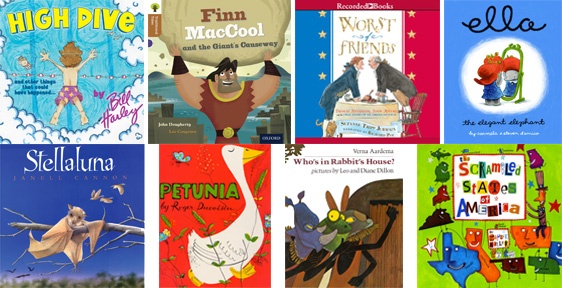 Finn and Angus both think they are the biggest giants in the land.  But when they finally meet, Finn has second thoughts… Traditional Tales offer the best-loved stories from around the world with clear phonic progression. These enchanting tales have been shared for generations and now every child can listen for themselves.

A silly goose learns that carrying a book under her wing doesn't necessarily make her knowledgeable.

Disenchanted with their fixed places on the map, the states swap spots in hopes that each can get to see a different part of the country and do something different for a change.

Listening to a story together as a family initiates bonding time and sparks full family conversations. You may find that younger family members can follow along and enjoy stories above their grade level - especially if you discuss the story as a family to help explain more challenging passages. In addition to building your children's vocabularies, the conversations generated teach important social skills. Many families enjoy listening to stories together in the car, for road trips, but also try listening at the beach, or in the backyard! 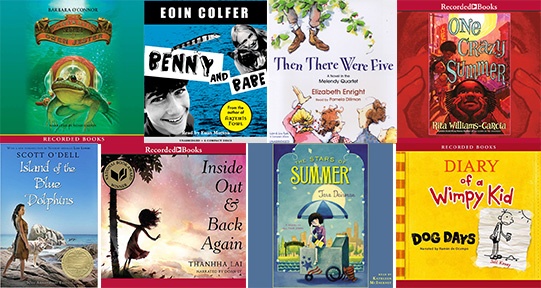 An amazing secret has tumbled off a freight train into Carter, Georgia, and Owen Jester is the only person who knows about it. If he can simply manage to evade his grandfather's snappish housekeeper and keep his nosy neighbor, Viola, at bay, he just might be in for the summer of a lifetime.

Eleven-year-old Delphine and her younger sisters Vonetta and Fern travel to Oakland to meet their mother, Cecile, who abandoned their family years earlier. But even when Cecile gets them to her house, she shows no interest and seems to view them as nothing but a nuisance. Cecile's cold, unloving attitude leaves the girls wishing for the mother-daughter connection they've never had. But Cecile acts remarkably different after she sees her daughters at the Black Panther rally, where they recite a poem Cecile herself had written. At that point, Cecile's attitude toward her daughters begins a remarkable change.

In this charming sequel to All Four Stars, eleven-year-old foodie Gladys Gatsby now has her first published review under her belt and is looking forward to a quiet summer of cooking and reviewing. But her plans quickly go awry when her friend Charissa Bentley delivers Gladys's birthday gift: a free summer at Camp Bentley. As Gladys feared, camp life is not easy: she struggles to pass her swim test and can't keep the other campers happy while planning lunches. The worst part is she can't seem to sneak away for her latest assignment--finding the best hot dog in New York City.  Could this summer be the end Gladys's reviewing career?

Super hot days can make kids want to hide inside, where the AC is strong and the TV beckons. Try a story - maybe the first book in a series - as an alternative to screen time. Whip up some ice cream sundaes or grab a box of popsicles to enjoy during the story. 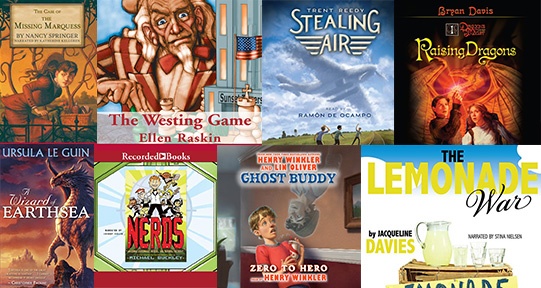 As Samuel G. Westing's 16 heirs gather for the reading of his will, they are elated to find that one of them stands to inherit a cool $200 million. In order to collect it, all he or she has to do is expose Mr. Westing's murderer, who also happens to be one of the heirs. As they are paired up and furnished with a set of clues, each scrambles to unravel the murder mystery. In a contest where nothing is as it seems, someone could wind up very rich—or very dead.

Billy Broccoli is new to the neighborhood, and wants cool friends and a spot on the baseball team more than anything. But the one thing he never wanted is his own personal ghost. So imagine his surprise when he ends up sharing a room with Hoover Porterhouse, a funny ghost with a whole lot of attitude.  When an obnoxious school bully sets out to demolish Billy, the Hoove comes up with a plan for revenge. It's all in the Hoove's Rule Number Forty-Two: Stay cool. And like it or not, Billy and the Hoove have to stick together if Billy ever wants to get in style, get even, and conquer the school.

Evan's little sister Jessie may be a smartypants, but he usually doesn't mind her. That is, until he hears Jessie's going to skip third grade and be in his year at school. Now, with tempers flaring, their friendly lemonade-selling competition is turning into an all-out war.

Summer is the season for picking your own fruits - many areas have pick your own farms just a quick Google search away. Plan a family fruit picking outing and listen to a story about that fruit on the way there or on a speaker in the orchard. Bonus: playing the story on a speaker will help kids stay nearby - if they stray too far, they won't be able to hear the story. 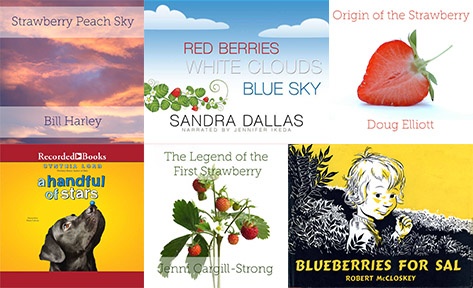 It's 1942: Tomi Itano, 12, is a second-generation Japanese American who lives in California with her family on their strawberry farm. Although her parents came from Japan and her grandparents still live there, Tomi considers herself an American. She doesn't speak Japanese and has never been to Japan. But after the Japanese attack on Pearl Harbor, things change. "No Japs Allowed" signs hang in store windows and Tomi's family is ostracized. Suspected as a spy, Tomi's father is taken away. The rest of the Itano family is sent to an internment camp in Colorado. Tomi becomes bitter, wondering how her country could treat her and her family like the enemy. What does she need to do to prove she is an honorable American?

Set during a harvesting season among the blueberry barrens of coastal Maine, a small-town veteran, Lily, and Salma, a Hispanic migrant worker forge an unexpected friendship which leaves them both forever changed.

A little girl and a little bear on a blueberry picking trip get all mixed up with each other's mothers on a lovely hillside in Maine. 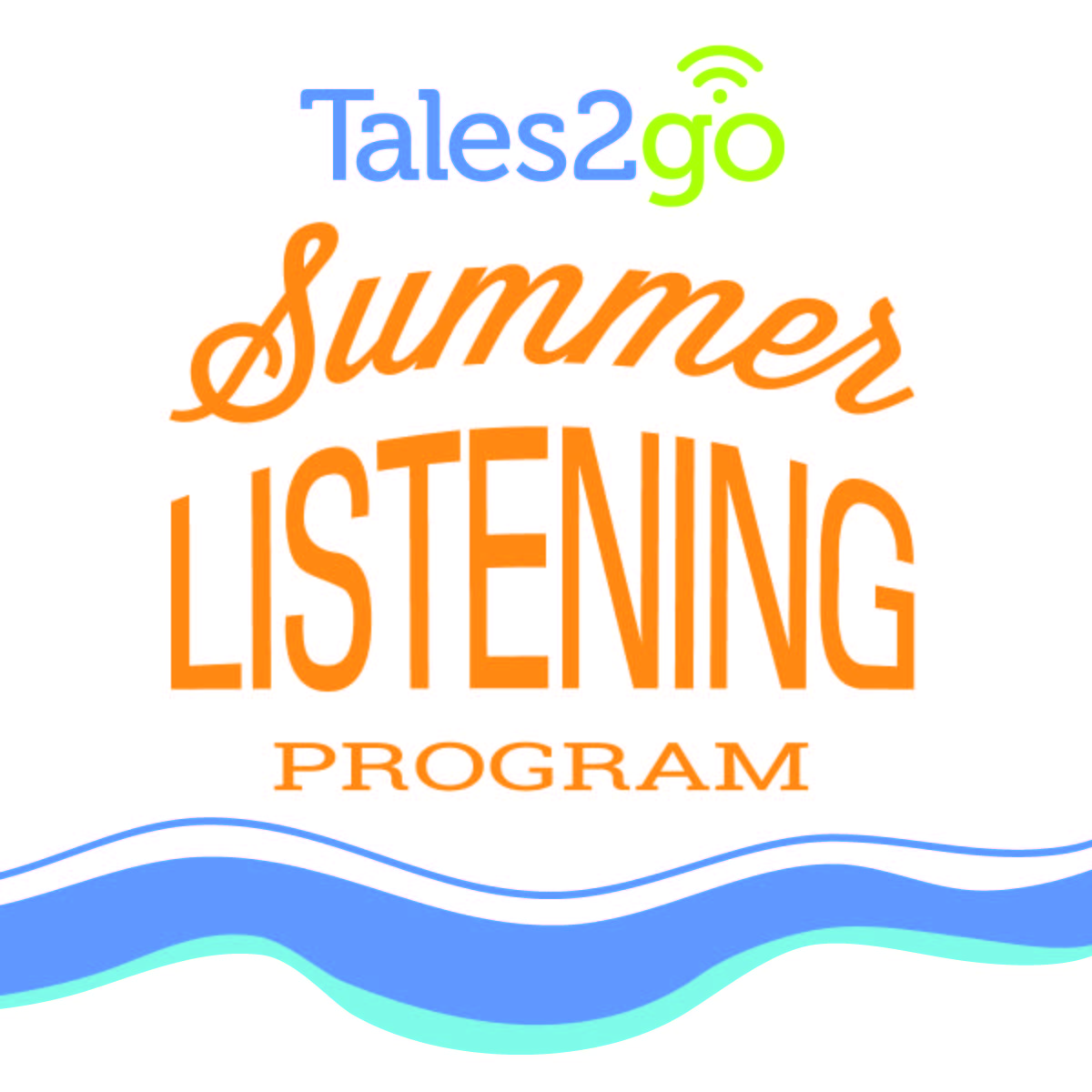 Middle schoolers love a good adventure story. Actually, so do we all, amirite? The adventure, science fiction, and fantasy genres are all becoming more entwined, yielding some truly enthralling…

Blog
Guest Post: Audiobooks for Teenagers Take a Bite Out of Your Summer Reading Requirement!