Home » Blog Home » Take a Bite Out of Your Summer Reading Requirement!

Take a Bite Out of Your Summer Reading Requirement! 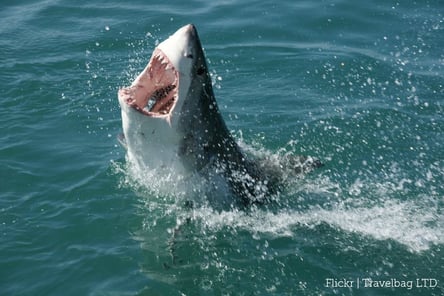 Shark Week has been an exciting and terrifying highlight of every summer for 30 years! Are your students in frenzy learning about sharks? Keep feeding their interest with these titles featuring sharks. 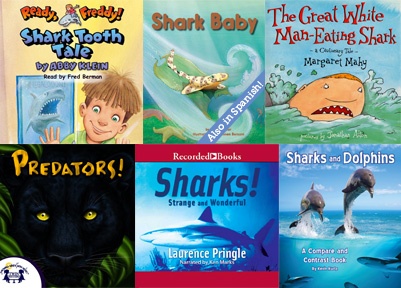 Get to know Freddy Thresher, the first grade shark expert with an uncanny knack for mischief.  Join Freddy in this adventure as he schemes and scrimps, trying to earn enough money to buy an awesome fossilized shark tooth.

"Who am I?" wonders Shark Baby. When his "mermaid's purse" egg case is torn loose in a storm, he finds himself on a journey through different ocean habitats: kelp forests, coral reefs, and seagrass meadows. He learns what kind of shark he isn't, but not what kind he is. He needs to find the "mermaid" to learn where he belongs, but the ocean is big and full of dangers. Will he find out who he is—and what he can do—in time?

Did you know there are over 400 different species of sharks? Did you know they have been on Earth much longer than humans, and even lived before the dinosaurs? Here you'll learn all about these fearsome kings of the ocean, including their eating habits and the basics of their anatomy. Sharks come in many sizes, from under a foot long to over 40 feet-and that's not even counting the long-extinct, 60-foot-long Megalodon shark. And while some have been known to bite people, they are usually quite content to hunt other sea creatures. Winner of the Washington Post/Children's Book Guild Nonfiction Award, author Laurence Pringle presents this masterful introduction to one of nature's most misunderstood, yet exciting, animals.

I Survived The Shark Attacks of 1916 by Lauren Tarshis

"In the summer of 1916, ten year-old Chet Roscow is captivated by the local news: a Great White shark has been attacking and killing people up and down the Atlantic Coast, not far from Chet's hometown of Springfield, New Jersey. Then one day, swimming with his friends, Chet sees something in the water. . ."

Her story is amazing enough to inspire a major motion picture. Back on the surfboard just one month after losing her arm in a shark attack, professional surfer Bethany Hamilton became the cover girl of courage, inspiring millions around the world. In this devotional, Bethany speaks straight to her "soul sisters," teen girls, about the challenges of facing your fears, living your faith, and letting God take you on an epic ride. Listen to the audio about how to stand up for your faith, make a difference, and avoid wipeouts. Hear Bethany's prayers and then journal your own. Learn about the highs of extreme sports and extreme faith.

Sophie: The Incredible True Story of the Castaway Dog by Emma Pearse

The story that became a global sensation: Sophie, the Australian cattle dog who was lost at sea and swam six miles through shark-infested waters to remote islands where she survived in the wild for five months. It was just another day in paradise as Jan and Dave Griffith, along with their blue cattle dog, Sophie, motored out of Mackay Marina for a gorgeous weekend at sea. But when the sky suddenly darkened and the waves turned fierce, the unthinkable happened: Sophie disappeared overboard. From the first day the Griffiths set eyes on puppy Sophie through that terrible October day she was lost, to Sophie's time as a castaway and the reunion that almost didn't happen, journalist Emma Pearse recreates the incredible journey of this canine Robinson Crusoe. An inspirational story of loyalty and the resilience of the spirit, Sophie offers undeniable proof about the unbreakable bond between humans and our pets-and that if lost, they would do anything to come home to us.

Lots of Books (Set) in the Ocean

Once they've had a taste of audiobooks featuring sharks, your students will be hooked! Try offering up some ocean themed titles like these to keep them coming back. 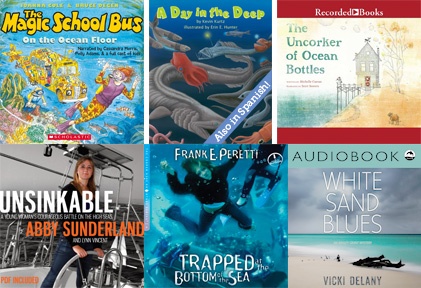 Remember, these are just a selection of titles in the Tales3go catalog of nearly 8,500 titles. Use the Advanced Options in the Search function to fish for more.

One of the most common reasons people love audiobooks for kids is because listening to stories reduces screen time. In the same way that children love to snuggle up to an adult for bedtime…