Tales of the Heart 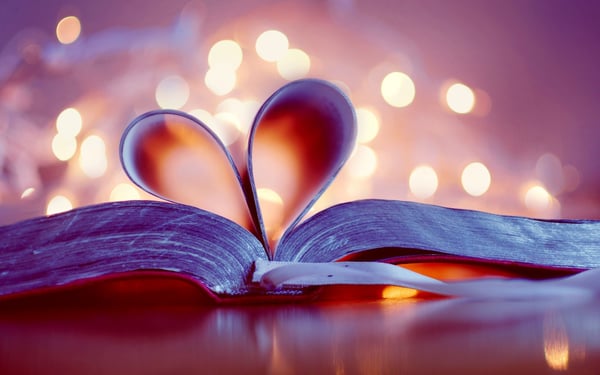 Love stories are uplifting and help us to remember all the good there is in the world. Of course, when we see the phrase 'love story,' there's a specific kind of story that comes to mind. But, love comes in all shapes, sizes, and forms. This much requested little link library of titles highlights some tales of the heart that might help you think differently about the sources of love. 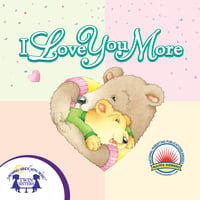 I Love You More by Bailey Thompson 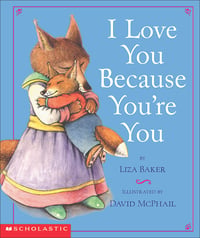 I Love You Because You're You by Liza Baker

In a poem about a Mama Fox's unconditional love for her cub, this story describes the many moods of all children - from happy to frightened, bashful to silly, and more - and will reassure them of their parents' abiding affection and approval. 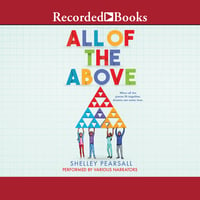 All of the Above by Shelley Pearsall

We know there’s a lot of people out there who think our school is a dead end. And that all the kids inside it are dead ends, too. … But they’ve got it all wrong. Just you wait and see! James, Rhondell, Sharice, and Marcel are four inner-city students on a quest to build the world’s largest tetrahedron with their math teacher, Mr. Collins. If they succeed, maybe Rhondell will make new friends, Sharice’s foster mother may start to care, James will discover something he’s good at, and Marcel’s dad will finally see that there is more to life than barbecue. Maybe they’ll even end up in the Guinness Book of World Records! Weaving together the stories of the kids, their teacher, and the community that surrounds them, award-winning author Shelley Pearsall has written a vividly engaging story about math, life, and the importance of friendship. 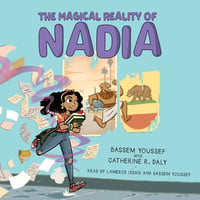 A hilarious and heartfelt story about prejudice, friendship, empathy, and courage. Nadia loves fun facts. Here are a few about her: - She collects bobbleheads, she has 77 so far. - She moved from Egypt to America when she was six years old. - The hippo amulet she wears is ancient…as in it’s literally from ancient Egypt. But then a new kid shows up and teases Nadia about her Egyptian ethnicity. It’s totally unexpected, and totally throws her off her game. And something else happens that Nadia can't explain: Her amulet starts glowing! She soon discovers that the hippo is holding a helpful -- and hilarious -- secret. Can she use it to confront the bully and win the contest? From The Daily Show comedian Bassem Youssef and author Catherine Daly comes a humorous and heartfelt story about prejudice, friendship, empathy, and courage. 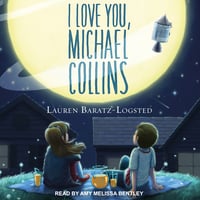 I Love You, Michael Collins by Lauren Baratz-Logsted

It's 1969 and the country is gearing up for what looks to be the most exciting moment in U.S. history: men landing on the moon. Ten-year-old Mamie's class is given an assignment to write letters to the astronauts. All the girls write to Neil Armstrong ("So cute!") and all the boys write to Buzz Aldrin ("So cool!"). Only Mamie writes to Michael Collins, the astronaut who will come so close but never achieve everyone else's dream of walking on the moon, because he is the one who must stay with the ship. After school ends, Mamie keeps writing to Michael Collins, taking comfort in telling someone about what's going on with her family as, one by one, they leave the house thinking that someone else is taking care of her-until she is all alone except for her cat and her best friend, Buster. And as the date of the launch nears, Mamie can't help but wonder: Does no one stay with the ship anymore? With I Love You, Michael Collins, Lauren Baratz-Logsted has created a heartwarming story about family and being true to yourself. 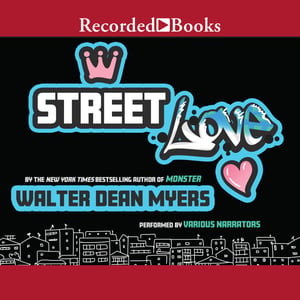 Your first love is totally wrong for you. Do you follow your heart? Or do you run away? A story of star-crossed urban love by award winning author Walter Dean Myers. 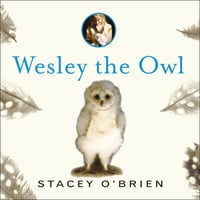 Wesley the Owl: The Remarkable Love Story of an Owl and his Girl by Stacey O'Brien

On Valentine's Day 1985, biologist Stacey O'Brien met a four-day-old baby barn owl-a fateful encounter that would turn into an astonishing nineteen-year saga. With nerve damage in one wing, the owlet's ability to fly was forever compromised, and he had no hope of surviving on his own in the wild. O'Brien, a young assistant in the owl laboratory at Caltech, was immediately smitten, promising to care for the helpless owlet and give him a permanent home. Wesley the Owl is the funny, poignant story of their dramatic two decades together. With both a tender heart and a scientist's eye, O'Brien studied Wesley's strange habits intensively-and provided a mice-only diet that required her to buy the rodents in bulk (28,000 over the owl's lifetime). As Wesley grew, O'Brien snapped photos of him at every stage like any proud parent, recording his life from a helpless ball of fuzz to a playful, clumsy adolescent to a gorgeous, gold-and-white, macho adult owl with a heart-shaped face and an outsize personality that belied his eighteen-inch stature. When O'Brien develops her own life-threatening illness, the biologist who saved the life of a helpless baby bird is herself rescued from death by the insistent love and courage of this wild animal. Wesley the Owl is a thoroughly engaging, heartwarming, often funny story of a complex, emotional, nonhuman being capable of reason, play, and, most important, love and loyalty. It is sure to be cherished by animal lovers everywhere. 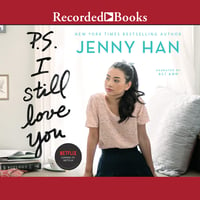 P.S. I Still Love You by Jenny Han

Given the way love turned her heart in the New York Times bestselling To All The Boys I've Loved Before, which School Library Journal called a "lovely, lighthearted romance," it's no surprise that Laura Jean still has letters to write. Lara Jean didn't expect to really fall for Peter. She and Peter were just pretending. Except suddenly they weren't. Now Lara Jean is more confused than ever. When another boy from her past returns to her life, Lara Jean's feelings for him return too. Can a girl be in love with two boys at once? In this charming and heartfelt sequel to the New York Times bestseller To All the Boys I've Loved Before, we see first love through the eyes of the unforgettable Lara Jean. Love is never easy, but maybe that's part of what makes it so amazing. 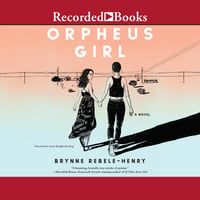 In her debut novel, award-winning poet Brynne Rebele-Henry re-imagines the Orpheus myth as a love story between two teenage girls who are sent to conversion therapy after being caught together in an intimate moment. For years Raya has fought to hide her feelings for her best friend and true love, Sarah. When the two are outed, they are sent to Friendly Saviors: a re-education camp meant to fix them and make them heterosexual. Upon arrival, Raya vows to assume the role of Orpheus, to return to the world of the living with her love, and after she, Sarah, and the other teen residents are subjected to abusive and brutal treatments by the staff, Raya only becomes more determined to escape. Brynne Rebele-Henry weaves a powerful inversion of the Orpheus myth informed by the disturbing real-world truths of conversion therapy. Orpheus Girl is a story of dysfunctional families, trauma, first love, heartbreak, and ultimately, the fierce adolescent resilience that has the power to triumph over darkness and ignorance. 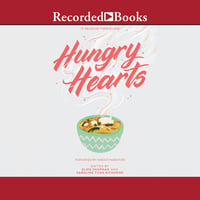 From some of your favorite bestselling & critically acclaimed authors comes a collection of interconnected short stories that explore the intersection of family, culture, and food in the lives of thirteen teens. A shy teenager attempts to express how she really feels through the confections she makes at her family's pasteleria. A tourist from Montenegro desperately seeks a magic soup dumpling that could cure his fear of death. An aspiring chef realizes that butter and soul are the key ingredients to win a cooking competition that could win him the money to save his mother's life. Welcome to Hungry Hearts Row, where the answers to most of life's hard questions are kneaded, rolled, baked. Where a typical greeting is, "Have you had anything to eat?" Where magic and food and love are sometimes one and the same. Told in interconnected short stories, Hungry Hearts explores the many meanings food can take on beyond mere nourishment. It can symbolize love and despair, family and culture, belonging and home. 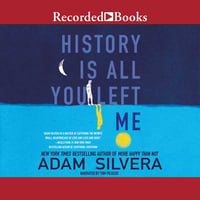 History Is All You Left Me by Adam Silvera

OCD-afflicted Griffin has just lost his first love, Theo, in a drowning accident. In an attempt to hold onto every piece of the past, he forges a friendship with Theo's last boyfriend, Jackson. When Jackson begins to exhibit signs of guilt, Griffin suspects he's hiding something, and will stop at nothing to get to the truth about Theo's death. But as the grieving pair grows closer, readers will question Griffin's own version of the truth-both in terms of what he's willing to hide and what true love means.

Want to use some of these titles in your own virtual bookshelf? Click here to view our spreadsheet to get started.