Sharing meals and food can be a big part of our lives. Kitchens are often the busiest and most social rooms in our homes. Many stories are written about food-related traditions and experiences. These stories teach us about different cultures' delicious dishes, tell tales about fictional foods and the creatures who eat them, introduce the people and companies who bring us ingredients, and lots more. Some of these stories will really get your mouth watering, making them great for listening to while you prepare meals as a family or for your family. So keep reading and pick a story to listen to while you make dinner tonight! 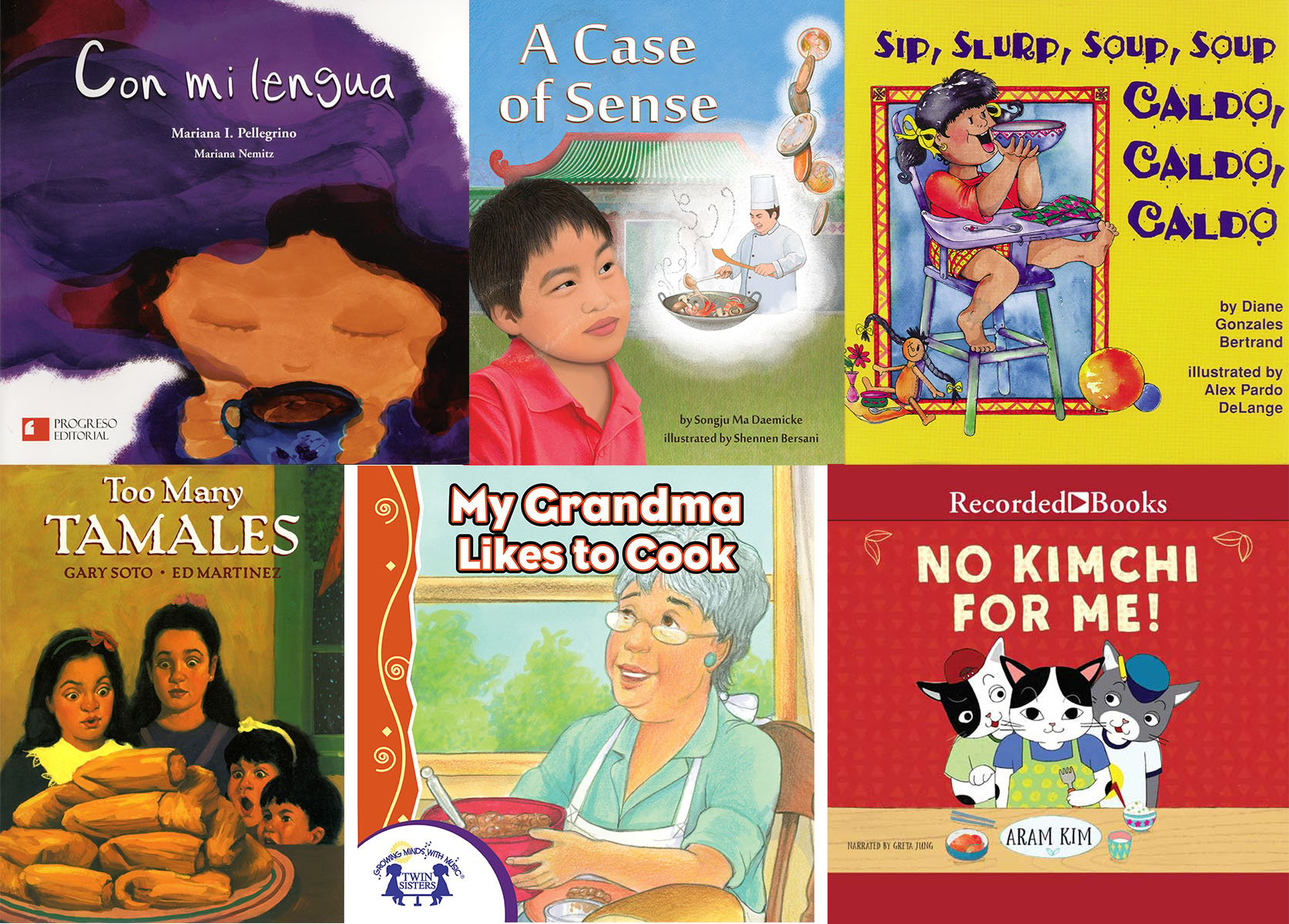 Con Mi Lengua by Mariana I. Pellegrino (in Spanish)

Spicy food, bitter medicine and the joy of sharing a meal are related in such vivid detail it will bring on hunger pangs.

While Ming plays outside one summer day, the smell of delicious food fills the air. It is coming from greedy Fu Wang's house. "What is he up to?" wonders Ming. To his alarm, Fu Wang demands that all the neighbors pay him for the pleasant smells. When the neighbors refuse, the case goes to court. How will the judge rule in this unusual case and will justice be served? Can Fu Wang make money from the neighbors' sense of smell? A wise judge makes use of another sense to close the case with clever and convincing logic.

No Kimchi for Me by Aram Kim

Yoomi hates stinky, spicy kimchi-the pickled cabbage condiment served at Korean meals. So her brothers call her a baby and refuse to play with her. Yoomi is determined to eat kimchi. She tries to disguise it by eating it on a cookie, on pizza, and in ice cream. But that doesn't work. Then Grandma shows Yoomi how to make kimchi pancakes. This story about family, food, and a six-year-old "coming of age" has universal themes, and at the same time celebrates Korean culture. A kimchi pancake recipe and other back matter are included.

Audiobooks can be an enticing resource for English Language Learners. 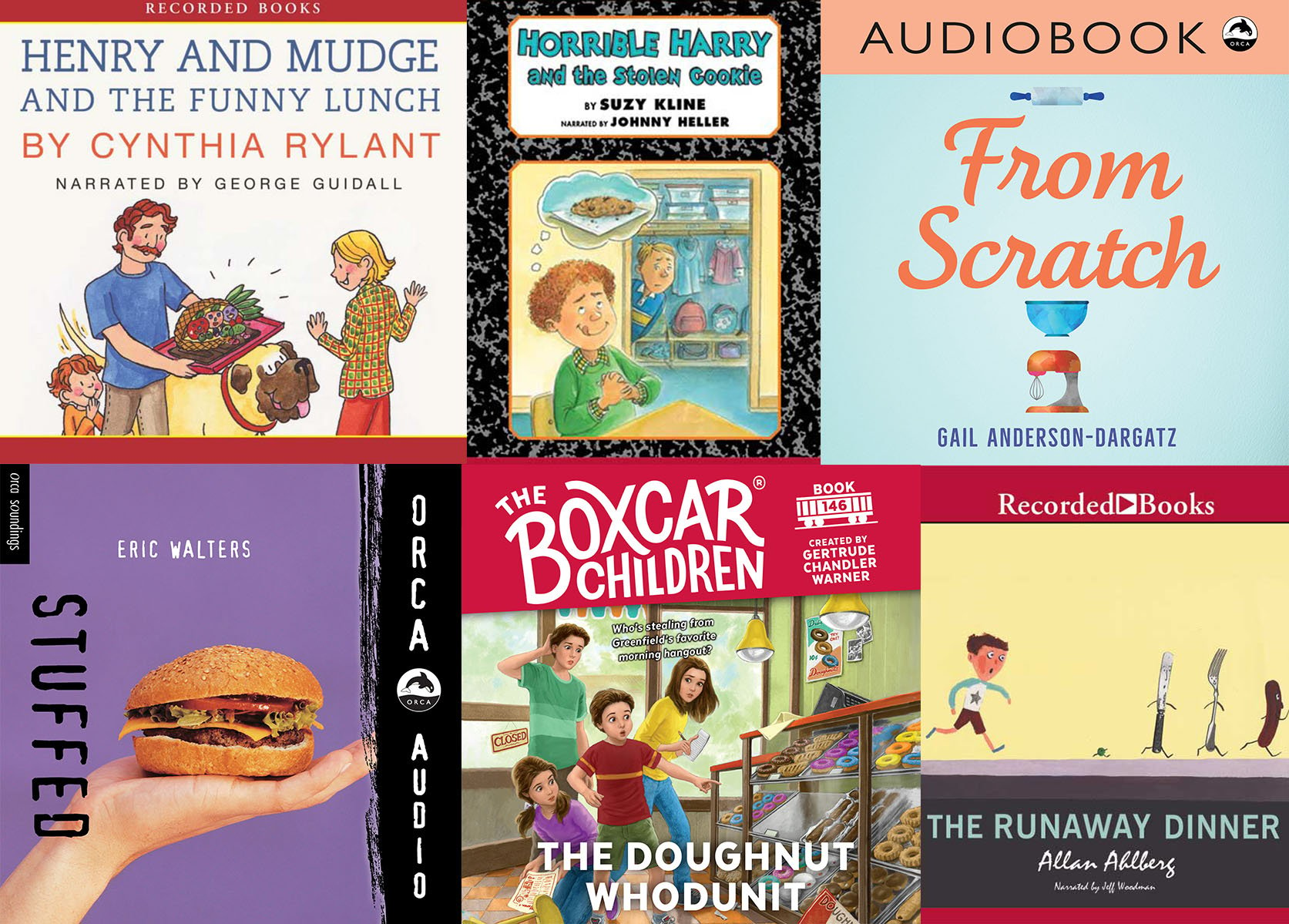 Horrible Harry and the Stolen Cookie by Suzy Kline

The kids in Room 3B are holding a Sharing and Caring Tag Sale to earn money for charity. Song Lee and Ida are selling friendship bracelets, Doug is selling books, and Sid is selling delicious, fresh-baked chocolate chip cookies. But something else is on Harry's mind: his grandmother is having money trouble, and Harry wants to help. So he comes up with a plan to raise money for her. The problem is that Harry doesn't realize his plan involves stealing from the class's charity collection! How can Doug stop his friend from becoming a horrible thief? Could the answer come from one of Sid's delicious cookies?

From Scratch by Gail Anderson-Dargatz

Cookie is about to lose her job at the local bakery. She dreams of owning her own bakery but doesn't think she has the skills or money to do it. Most of all, she doesn't have the self-confidence. When she takes a course at the local college, she finds she has much more going for her than she imagined. With the help of her community, she figures out how to make sure no one has to go without her famous doily cookies for long!

The Runaway Dinner by Allan Ablberg

Like most little boys his age, Banjo is hungry! He can't wait to gobble up his delicious dinner. But as he sits at the table ready to dig in, something very wild and wacky happens. Melvin the sausage suddenly leaps from Banjo's plate and leads Peter, Percival, Paul, Caroline, Clara, and the other peas and carrots on a daring escape. As the silverware, table, and chairs also flee the kitchen, Banjo begins a hilarious race to catch up with his very, very fast food. 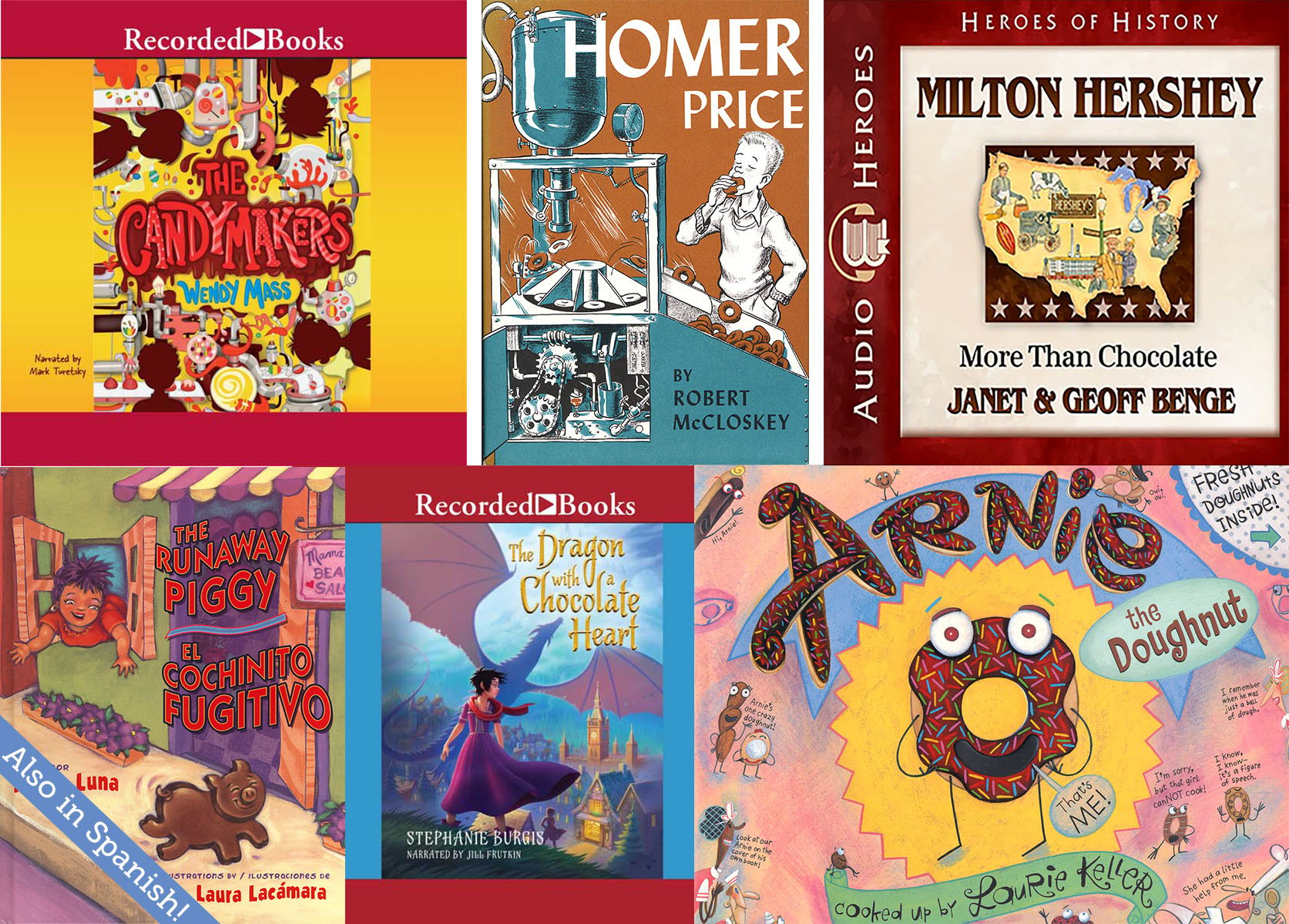 The Candymakers by Wendy Mass

ALA Schneider Family Book Award-winning author Wendy Mass offers this tasty treat of a tale sure to appeal to any listener's sweet tooth. The Candymakers follows 12-year-olds Logan, Philip, Daisy, and Miles as each tries to invent a candy even better than the Oozing Crunchorama. But with these contestants—who can detect chocolate by touch and lift 50 lbs. of taffy as if it weighed no more than a loaf of bread—it's going to be a close race.

"We've done more than our share to see you right, but you're a Hershey, a true son of a dreamer," Milton's Uncle Abraham said. "You'll never stick with anything long enough to make it work for you." Milton gulped. He'd already suspected that his relatives had given up on him succeeding as a candy maker, but the words still stung.  When Milton Hershey's famous Hershey Bars debuted in 1905, few people knew of the hard work, dedication, and sacrifice preceding the triumph. Debt, lack of support, and fatigue had been constant companions for the famous chocolatier and philanthropist - a man with a fourth-grade education.  Despite comparisons to his wandering father, Milton never gave up. Learning from his mistakes, he spent a lifetime creating sweet things to eat - first caramel, then chocolate. As his company soared, Milton used his wealth to care for others, founding a town for Hershey workers, a school for children in need, and a foundation dedicated to education, culture, and health care (1857-1945).

Arnie The Doughnut by Laure Keller

Arnie Looks like an average doughnut, made by one of the best bakeries in town.  When Mr. Bing buys him and brings him home to his breakfast table, however, Arnie realizes his carefree days are about to end...unless he persuades Mr. Bing that a doughnut be more than just a snack. 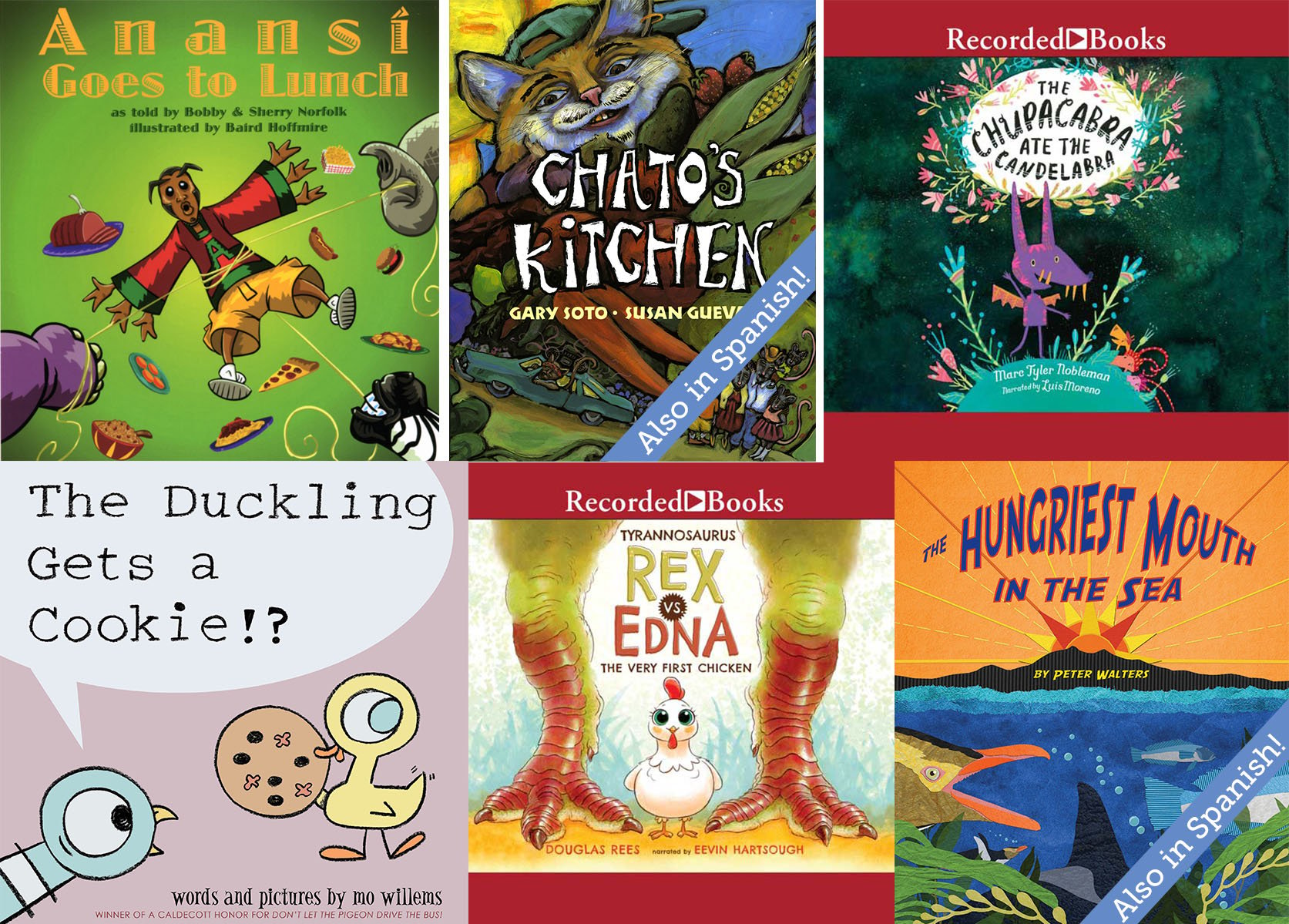 Chato invites a family of mice to his house to share a tasty meal but to his surprise ends up eating tortillas and not them for dinner!

The Chupacabra Ate the Candelabra by Marc Tyler Nobleman

This truly original tale based on a legendary monster is sure to crack up kids and grown-ups alike, setting the standard for chupacabra picture books! Jayna, Bumsie, and Pep are goats. And, like most goats, their greatest fear is being eaten for dinner by the legendary Chupacabra, as it is common knowledge that goats are a chupacabra's favorite food! One night, tired of living in fear, the impetuous goats whip out their trusty candelabra and head off to find the beast and scare it away before it can find them. Little do they know that candelabras are the chupacabra's third-favorite food-a fact he reports after he's gobbled up theirs. Unfortunately, he's still hungry-for his second-favorite food. Fortunately, that's not goats, either-it's cucarachas! When those are gone, too, he announces that he's now hungry for his favorite food-and the goats are in for their biggest surprise.

A humorous picture book in which Edna the very first chicken faces off against a hungry Tyrannosaurus Rex. Tyrannosaurus Rex wants breakfast. He stomps and he roars and he gnashes his pointy teeth-and he scares all the other dinosaurs right out of the forest. Only Edna, the very first chicken, stands her ground. T. rex may have mighty claws and terrible jaws, but Edna has a mighty beak and terrible flapping wings. And sometimes, all it takes to defeat someone big and fierce is someone small and brave. 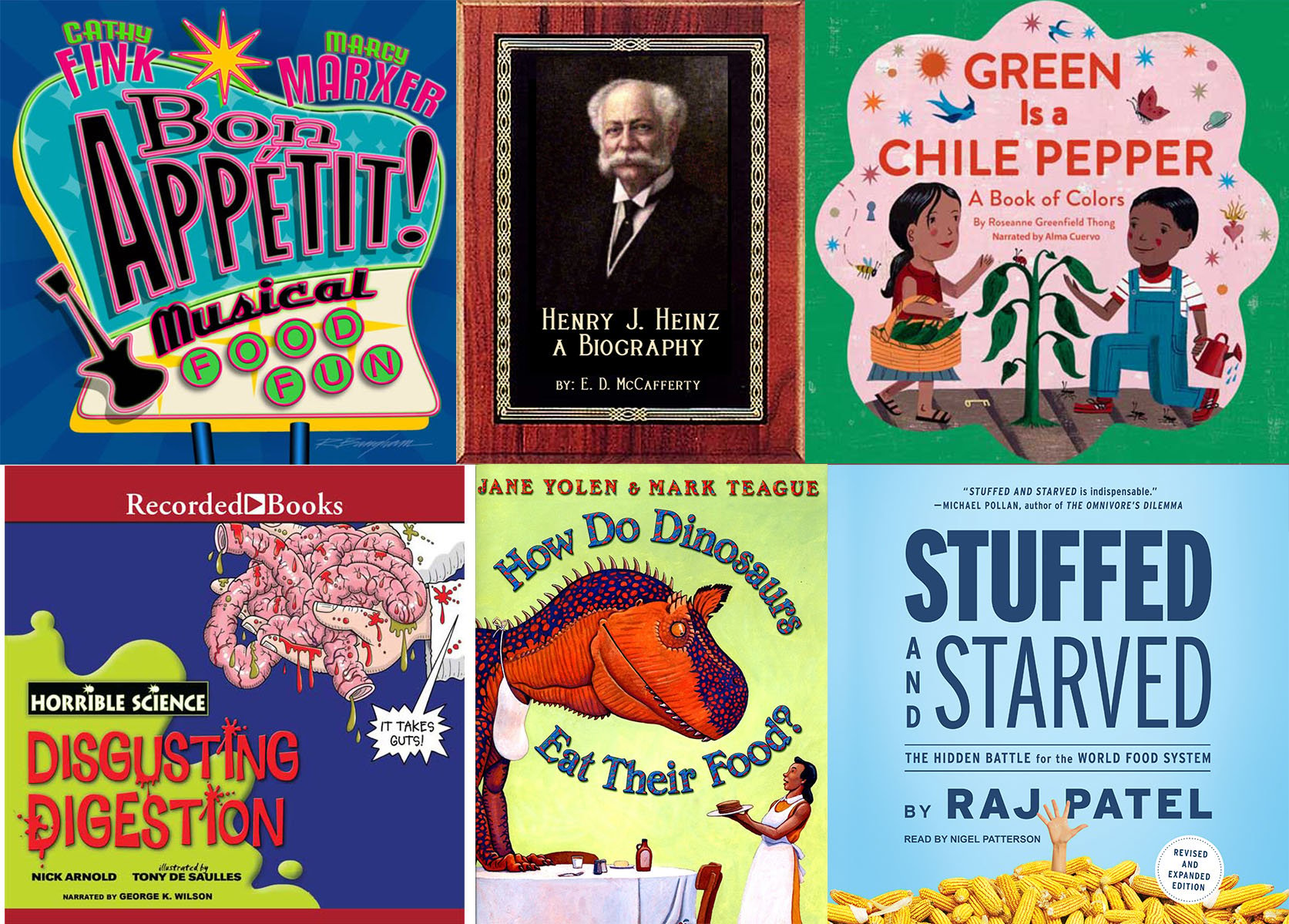 Green is a Chile Pepper by Roseanne Greenfield Thong

Green is a chile pepper, spicy and hot. Green is cilantro inside our pot. In this lively story, children discover a world of colors all around them: red is spices and swirling skirts, yellow is masa, tortillas, and sweet corn cake.

Repulsive regurgitations, icky intestines, boisterous bowels, loathsome livers, attacking acids-all of these are involved in the foul science of digestion. Can you stomach it? If not, keep a barf bucket handy! After eating your breakfast, lunch, dinner or midnight snack, you probably don't think much about that food until you visit the bathroom several hours later. But in the meantime, the edibles you gobbled up take an amazing journey-a trip through the fizzy digestive tract that's also really, really gross. Once you chomp up and swallow the food, things just keep getting nastier and nastier until the final stage-defecation! Nick Arnold, the Aventis Prize-winning author of the Horrible Science series, makes science fun and fascinating for kids. Relating information with lively humor and refusing to dumb down the material, Arnold presents a book that's every bit as entertaining as it is educational-and disgusting! Narrator George K. Wilson relishes relating vivid descriptions of gooey guts galore.

Stuffed and Starved by Raj Patel

It's a perverse fact of modern life: There are more starving people in the world than ever before, while there are also more people who are overweight. To find out how we got to this point and what we can do about it, Raj Patel launched a comprehensive investigation into the global food network. It took him from the colossal supermarkets of California to India's wrecked paddy-fields and Africa's bankrupt coffee farms, while along the way he ate genetically engineered soy beans and dodged flying objects in the protestor-packed streets of South Korea. What he found was shocking, from the false choices given us by supermarkets to a global epidemic of farmer suicides, and real reasons for famine in Asia and Africa. Yet he also found great cause for hope-in international resistance movements working to create a more democratic, sustainable and joyful food system. Going beyond ethical consumerism, Patel explains, from seed to store to plate, the steps to regain control of the global food economy, stop the exploitation of both farmers and consumers, and rebalance global sustenance.

By now, you've seen the myriad posts about resolutions and intentions. We're fans of intentions because they come with a sense of movement and hope. Intentions tend to incorporate more growth…