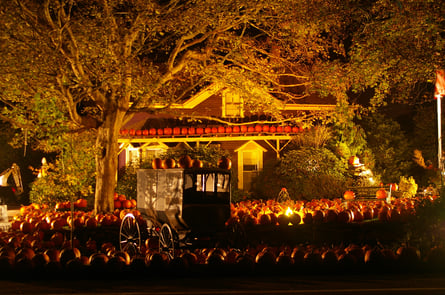 There's a chill in the air and every store has at least one haunted aisle. It must be near Halloween! If your library or classroom isn't ready yet, this post has spooky story suggestions for every ghoul and goblin in your school. If you're using the passports or brag bracelets from last week's post, these would all qualify for the Spookyville genre!

If you're viewing this post on a computer that's logged into Tales2go, you can click the titles to start listening (or bookmark, or favorite) the titles right away. If you're reading this on a mobile device, you can also search for these titles in the app. Remember - these are just a few of the recently added spooky stories - check out the genre "spooky" in the app or web player for many, many more!

My FANGtastically Evil Vampire Pet, features an aspiring evil scientist, paranormal pets, and plenty of hilarious summer camp shenanigans. Welcome to Camp Mwhaaa-haa-ha-a-watha! This summer is going to be epic. Epically evil, that is. 'Cause I'm going to Evil Scientist Summer Camp! No annoying little brothers. No annoying zombie goldfish. Just me, my best friend Sanj, our notebook of evil plans, and my truly evil (and totally forbidden) vampire kitten Fang. We've got it all planned out. Okay, so maybe I didn't expect for the totally not-evil Geeky Girl to show up, or for Sanj to find a new partner to work with, but there's no way I'm going to let them ruin my summer. Evil Emperor of the Camp, here I come! Signed, The Great and Powerful Mark

A Witch Alone (Book 2 of The Apprentice Witch)

With all of the charm and appeal of The Apprentice Witch, A Witch Alone follows a very special heroine into a deeper darkness as magical creatures start to creep into Hylund... Arianwyn is a fully qualified witch, but somehow magic doesn't feel any easier than it did in her apprentice days. The Hex has driven all manner of supernatural creatures out of the Great Wood and into her little town -- some benign, others dark, and others downright mischievous. The Spellorium has never been so busy! What's more, the High Elder has set her a dangerous secret mission. With Gimma acting weirder than usual and her friendships crumbling under pressure, Arianwyn faces the toughest spell of her witching career -- can she really see it through alone?

The Ghost of Slappy (Book 6 of Goosebumps Slappy World) by R.L. Stine

A brand new Goosebumps arc narrated by the most iconic and evil character of the series, Slappy! Slappy's back as a ghost! And this time, the only thing you'll play is hide-and-go-shriek!

Two queens, two religions, two visions for the future of the nation. Fleeing to London with a witch hunter on her trail, Alyce discovers her own dark magic and lands herself embroiled in the struggle. Alyce's mother has just been burnt at the stake for practicing witchcraft. With only a thin set of instructions and a witch's mommet for guidance, Alyce must face the world that she's been sealed off from -- a world of fear and superstition. With a witch hunter fast on her trail, she'll need the help of an innkeeper and a boy looking to discover the truth behind his own mother's past. But as her journey continues, another war rages: a hidden war of the supernatural, of the living and the dead. Good and evil are blurred, and nobody's motives can be trusted. And Alyce finds herself thrown unwillingly into the conflict. Struggling to understand her own powers, she is quickly drawn into a web of secret, lies, and dark magic that could change the fate of the world she is just coming to know. This dark, twisty, and thrillingly original debut will leave readers entranced in its suspenseful plot and rich prose.

A dragon causes flaming mayhem in this twelfth book in Christopher Pike's Spooksville series. A fire-breathing dragon has appeared out of nowhere and is looking for its treasure in Spooksville. In fact, the dragon intends to destroy the entire town unless its jewels and gold are returned immediately.

Twelve-year-old Sunny lives in Nigeria, but she was born American. Her features are African, but she has albinism. She's a terrific athlete, but can't go out into the sun to play soccer. There seems to be no place where she fits in. And then she discovers something amazing-she is a "free agent" with latent mystical power. Soon she's part of a quartet of students, studying the visible and invisible, learning to change reality. But will it be enough to help them when they are asked to catch a career criminal well-versed in powerful juju?

A dark and gorgeously drawn standalone YA fantasy about a band of mercenary girls in search of female glory. Won in a major six-house auction! Frey, Ovie, Juniper, and Runa are the Boneless Mercies-girls hired to kill quickly, quietly, and mercifully. But Frey is weary of the death trade and, having been raised on the heroic sagas of her people, dreams of a bigger life. When she hears of an unstoppable monster ravaging a nearby town, Frey decides this is the Mercies' one chance out. The fame and fortune of bringing down such a beast would ensure a new future for all the Mercies. In fact, her actions may change the story arc of women everywhere. Full of fierce girls, bloodlust, tenuous alliances, and unapologetic quests for glory, this elegantly spun tale challenges the power of storytelling-and who gets to be the storyteller. Perfect for fans of Maggie Stiefvater, V.E. Schwab, and Heidi Heilig.

The House of Dead Maids by Clare Dunkle

Clare B. Dunkle's works have received numerous honors, including the Mythopoeic Fantasy Award for Children's Literature, an ALA Best Book for Young Adults, and a Publishers Weekly Flying Start. The House of Dead Maids, a prelude to the classic Wuthering Heights, features Heathcliff, his newly arrived nursemaid Tabby Akroyd, and the restless ghost of the last maid. “Clare Dunkle creates a world filled with intense excitement, terror, beauty, and love—a world as persuasive as it is remarkable.”—Lloyd Alexander

The Turn of the Screw by Henry James

A young, inexperienced governess is charged with the care of Miles and Flora, two small children abandoned by their uncle at his grand country house. She sees the figure of an unknown man on the tower and his face at the window. It is Peter Quint, the master's dissolute valet, and he has come for Miles. But Peter Quint is dead. To all immediate appearances, The Turn of the Screw is a ghost story. But are appearances what they seem? A subtle, self-conscious exploration of the haunted house of Victorian culture, filled with echoes of sexual and social unease, The Turn of the Screw is probably the most famous and eerily equivocal of all ghostly tales.

Clicking titles, but need an account to start listening?

Happy Hispanic Heritage Month! Celebrating family and heritage is such a nice way to start the school year. Here in the Northern Hemisphere, temperatures are starting to dip and that also has us…